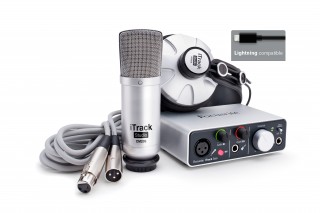 At the 2015 NAMM Show: Focusrite launched the iTrack Solo and iTrack Studio – their interface and bundle for recording on iPad, Mac, and PC – now updated with Lightning compatibility.

iTrack Solo is a 2-in, 2-out iPad, Mac, and PC audio interface featuring a Focusrite mic preamp. It offers a dynamic range of over 105dB and unique gain halos that show you when your recording signal is at the right level.

The iTrack Studio features everything you need to record on your Lightning compatible iPad, Mac, or PC: a condenser microphone, professional headphones, and all the cables and software you need to get started.