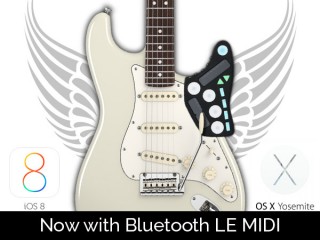 The Guitar Wing works as a bridge between guitars and control of digital effects, DAWs, and digital instruments. With native Bluetooth LE MIDI connections, the wireless device shows up in the system like any hardwired MIDI controller.

Guitar Wing also works as a controller for iOS, bringing music apps and effects “into the palm of the guitarist’s hands.” On iPads and iPhones, MIDI-controllable effects can be manipulated, from software like the AmpliTube guitar effects from IK Multimedia, Moog Filtatron, and even multit-rack recording with Wavemachine’s Auria.

Guitar Wing features three faders, five pressure-sensitive pads, ten buttons, and a 3D motion sensor.  The Guitar Wing works with any software that supports MIDI, and templates are available for products such as Ableton Live, Bitwig Studio, and Apple Logic, among others.

Pricing and Availability. The Guitar Wing MIDI controller has been available for some time, and retails for $189 at Livid Instruments, Sam Ash, Sweetwater, Guitar Center, and dealers worldwide. The updated, free WingFX software, plugin, and iOS app are available via the iOS App Store.