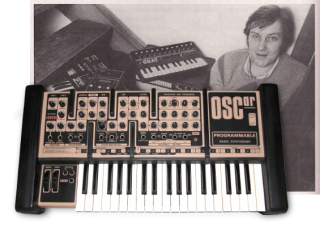 Novation is launching a summer-long celebration of its 35+ year heritage with a giveaway of one of the most rare and beloved classic synthesizers, the OSCar.

The celebration also honors Novation’s longtime synthesizer designer, Chris Huggett, who, along with the OSCar programmable monosynth (1983), is also the designer responsible for the WASP monosynth (1978), the single-oscillator Gnat (1981), monophonic analogue Bass Station (1994), analogue-modelling polyphonic Supernova (1998) and others.

Novation calls Huggett “a true synth legend. He is also our synth designer. Every Novation synth has been conceived, shaped and refined by his passion and expertise, which spans five decades.”

To celebrate Huggett’s legacy, Novation is giving away an OSCar, one of the most advanced programmable monosynths of its time. An instrument of choice for Orbital, BT, Jean-Michel Jarre, Asia, Ultravox, Stevie Wonder, Sneaker Pimps, Keith Emerson, and Underworld, only 2000 OSCars were ever produced.

Nick from Novation tells us that the giveaway OSCar “sounds absolutely amazing and is being given a full loving restoration in-house by hand to original spec. It’s valued at over £5000. We will be taking it with us to Sonar for people to play with before we give it away: we’re running a hands-on interactive synth exhibit of all the original synths (and some other slices of our history). Folks should come check it out.”

To enter the Novation OSCar giveaway, entrants have to have bought any Novation synth before 31st of August this year (serial number required), and answer a simple question (the answer to which is found in this article, and on the web page for the giveaway).

For more information on Novation’s heritage synthesizers, and for details of the OSCar giveaway, go to the Novation website.

23 thoughts on “Novation Is Giving Away A Classic OSCar Synthesizer”