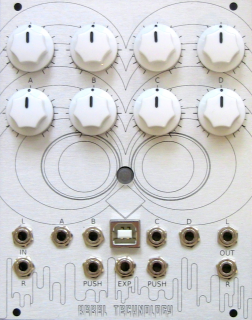 Rebel Technology has announced that the OWL Modular programmable digital audio Eurorack module will be released Aug 1 in London:

We’ll be holding a little launch event for the OWL Modular at the London Music Hackspace, this Saturday 1 August at 5pm. Come down to see us and get hands on with the new arrival!

We’ll be showing off the sonic capabilities of the patch library as well as demonstrating how to load up Faust, C++ and Pure Data patches. Bring your own code!

Based on the OWL Pedal, the Modular adds CV control and DC-coupled inputs and outputs, while retaining full patch compatibility. The platform is open source and a community of patch developers has created a diverse library of more than 70 effects for it, including phasers, flangers, delays, reverbs, distortion, compression and filters.

The OWL features an ARM Cortex M4 processor and, according to the developers, “it delivers outstanding performance and audio quality”.

The OWL Modular is available for pre-order at the Rebel Technology site for £319.00.