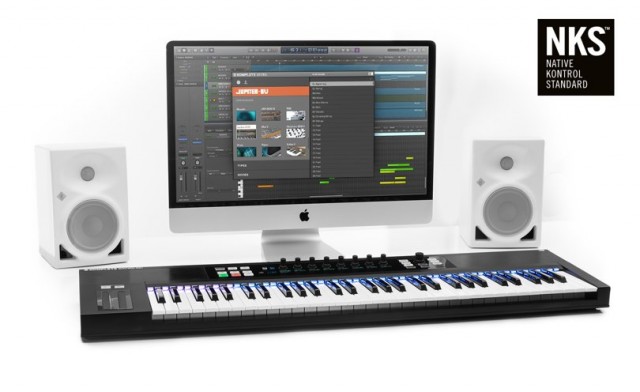 Native Kontrol Standard (NKS) is a new plug-in format that lets VST and Kontakt instrument developers integrate their plug-ins with Komplete Kontrol and Maschine at the same deep level as Komplete Instruments.

Instrument developers can use Native Map to create parameter mappings for the eight controller knobs on the S-Series keyboards or Maschine. NKS instruments can also access the Light Guide, so that third-party instruments can display key switches and sample assignments, for example.

NKS also allows plug-ins to access the Smart Play features in the Komplete Kontrol software – including the touch strips, scale mapping, Chord Sets, and the arpeggiator.

These partners have committed to releasing NKS versions of their instruments as a free update to current owners:

The keyboard also provides the same set of controls and features as the other S-Series keyboards, notably Smart Play (a set of melodic features controlling chords) and Light Guide (colored LEDs that indicate key switches, sound types, and more).