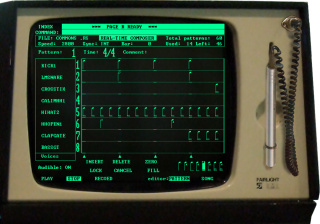 Among this year’s entries into the Australian National Film & Sound Archive’s Sounds of Australia are sounds of the Fairlight CMI.

Established in 2007, the Sounds of Australia is the NFSA’s selection of sound recordings with cultural, historical and aesthetic significance and relevance, which inform or reflect life in Australia.

Here’s what they have to say about the selection of the Fairlight CMI sounds:

The Fairlight CMI was the world’s first polyphonic digital sampling synthesizer, invented in 1979 by Peter Vogel and Kim Ryrie, based on a dual-6800 microprocessor created by Tony Furse in Sydney.

The Fairlight grew to become one of the most widely-used synthesizers in music, being used by musicians from Kate Bush to Brian Eno, and film and television composers such as Peter Best.

Here are a few of the iconic sounds of the Fairlight CMI: