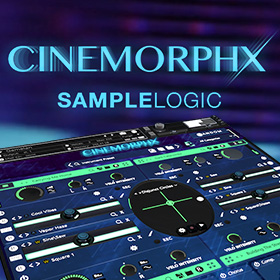 Intended for use in sound design or music production, and powered by Native Instruments’ Kontakt Player platform, the library is built on the framework of Sample Logic’s Cinematic Guitars Infinity.

Totaling more than 6,000 presets and 30 GB, Cinemorphx is made up of all of the sample material from Sample Logic’s legacy Ambience, Impacts, Rhythms (A.I.R.), The Elements, and Synergy virtual instruments, but with all-new sound design, presets, and effects functionality.

Sample Logic’s effects engine equips the Cinemorphx user with “modern and proprietary” effects and animation capabilities for “creating inspiring sounds on the fly.” The company has also partnered with Mac Pro Video to provide free, in-depth video walk-throughs of all of the product’s functionality. 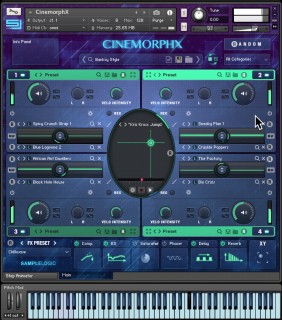 Sample Logic says an important advancement of the Cinemorphx interface for Kontakt is the inclusion of hot-swappable effects. A Sample Logic- first, Cinemorphx allows the Soundcore FX and Master FX chain to be built and re-ordered in real time from a selection of over 20 effects including.

A detailed overview of Cinemorphx’s capabilities is in this video: