We got to see an early K-Mix prototype at the 2015 Winter NAMM, but Synthtopia staff won’t have a chance to see the finished version of the product until later this week at the 2016 NAMM Show.

In the meantime, author and research engineer Gina Collecchia has had a recent extended opportunity to check out and work with the K-Mix.  She offered to share her impressions and findings with Synthtopia readers:

“The K-Mix mixer by Keith McMillen Instruments is an innovative mixing interface, with a lot of features.

“Uniting a more traditional mixer interface with LED-lit, opto-tactile “rotaries” and meters, the K-Mix has a similar look and feel to previous KMI products such as the QuNeo and QuNexus.

“The K-Mix boasts “high fidelity” pre-amps and 32-bit floating point audio with up to a 96kHz sampling rate. Putting it through its paces, there is little to no audible difference between the pre-amps of a high end, professional mixer and those on the K-Mix — even measuring slightly more quiet for some frequency ranges. The custom pre-amps require 30mW of power in total, which is 100x less power than regular mixers.

“Ins and Outs. The K-Mix has 8 ins and 10 outs: the first two channels of input have preamps for musical instrument inputs, featuring hybrid XLR / TRS combination jacks. The other six channels (#3 through 8) are 1/4″ TRS jacks, for connecting line level and phono level signals. This means that as many as three sets of turntables or CDJ’s could be plugged in simultaneously.

“The outputs are grouped into stereo buses: channels 1 and 2 could be used for monitoring; the remaining 6 are labeled as “Aux” (auxiliary) outs. The “Aux 1”, “Aux 2”, and “Aux 3″ buttons toggle views to set the send levels of each of the 8 inputs. Channels 9 and 10 of the outputs are routed to a 1/4” inch output in the bottom right corner, which can be used for any number of purposes: as headphone monitoring of any of the four stereo output bus pairs (or individual input channels), as an additional stereo output bus, or as a low-frequency output to a subwoofer. Graphics at the top of the mixer are right there to remind the user of the layout, nicknames, and types of the ins and outs.

“The K-Mix can be bus-powered by USB, or connected to a wall outlet. To connect the K-Mix to to external MIDI hard- ware via MIDI cables, a KMI MIDI Expander is an optional accessory. The MIDI Expander is attached to the K-MIX CONTROL port via USB. A computer is not necessary for the K-Mix to function; all of its DSP effects and output routing are on the device. 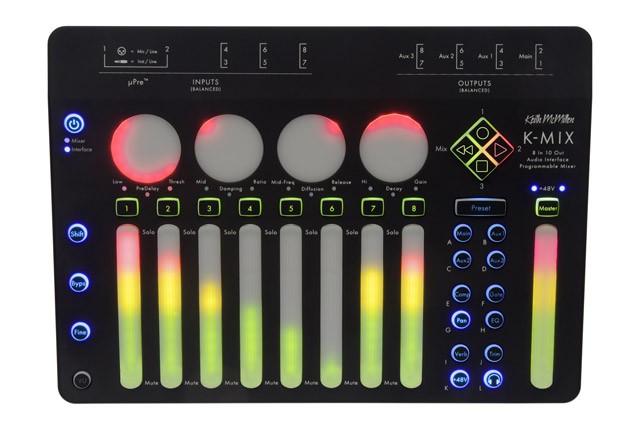 “Spatialization.” One innovative feature on the K-Mix is its interface for spatialization. Turning on the Surround feature in the K-Mix Editor, or by pressing “Shift” and then “Pan”, enables the gestures to control panning. The four top rotaries, with KMI’s proprietary SmartFabric sensor technology, enable 3D-like interaction with spatial objects (e.g., any number of the input channels): the pressure on the rotaries controls the spread (or diffusion) of the sound source, as does the proximity of your finger to the center of the rotary. Your finger’s position along the arc of the rotary designates the sound’s spatial position. The panning uses Ambisonics algorithms to ensure a high quality soundstage when working in a surround sound environment. The speaker set up and I/O mapping of the panning is defined on the K-Mix Editor, so a computer is required to configure this feature — but once that’s done, no computer is necessary.

“DSP. Besides surround panning, the K-Mix has four other on-board DSP effects: compression / limiter, noise gating, EQ, and reverb. Each of these are called “Modes”. The four rotaries control four parameters unique to each of the effects. Small LED lights next to the rotaries light up to show the name of the parameter being adjusted for each effect, making the effects view very compact and intuitive.

“Editor. The K-Mix Editor can modify all of the things you can do on the hardware itself, as well as send and receive presets to recall saved states of the K-Mix. Presets are created by pressing “Preset” and then picking one of the 12 Mode buttons (A through L). Presets can also be saved in the K-Mix Editor, but only 12 can be on the mixer at a time. It’s worthwhile to note that the state of the K-Mix will be preserved after power cycling. Monitoring the levels of the output channels is toggled by the “VU” button at the bottom left. While in this view, the input levels can still be adjusted with visual feedback; the view returns to the outputs after a second or two. Channels can be turned on and off quickly, using the usual numbered buttons at the top of each fader. The Master fader at the right has two rows of LEDs for stereo metering.

“The other three buttons on the left, “Fine”, “Byps”, and “Shift”, modify the behavior of a given mode. These buttons — much like the Control, Option, and Command keys on a PC — take some getting used to, mostly in figuring our and remembering which order to press the buttons to get to the desired destination.

“To set up the K-Mix using Ableton Live, set the “Input Config” to make either the mono or stereo inputs available, or both. The inputs and outputs are ready to accept a variety of audio signals such as microphone, line, instrument, and phono.

“All in all, the K-Mix is a compact, robust, feature-packed mixer with MIDI capabilities. Coming in just under one kilogram and with a low profile, musicians and DJs will appreciate how easy it is to carry on the road. This compact mixer is excellent for musicians who want a tactile interface for spatialization, and has great value when considering its size, weight, and ability to double as a MIDI interface.” 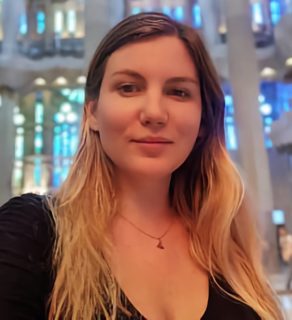 Gina Collecchia is a research engineer at SoundHound, Inc. and author of the book Numbers and Notes: An Introduction to Musical Signal Processing (2012, PSI Press).

An expert in many areas of digital audio, Collecchia has published papers on room acoustics, music information retrieval, and interface design. Gina holds degrees from Reed College and Stanford University, and currently resides in the Bay Area.

You can find out more about her work at GinaCollecchia.com.