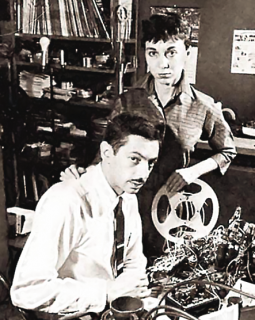 Barron, was co-composer with her husband Louis Barron, of the soundtrack for the 1956 sci-fi movie Forbidden Planet. The soundtrack is considered to be the first entirely electronic score for a film.

Here’s how Louis and Bebe explained the creation of Forbidden Planet soundtrack:

We design and construct electronic circuits which function electronically in a manner remarkably similar to the way that lower life-forms function psychologically. There is a “Cybernetics”, which is concerned with the Control and Communication in the Animal and Machine. It was first propounded by Prof. Norbert Wiener of M.I.T. who found that there are certain natural laws of behavior applicable alike to animals (including humans) and electronic machines.

In scoring Forbidden Planet – as in all of our work – we created individual cybernetic circuits for particular themes and leit motifs, rather than using standard sound generators. Actually, each circuit has a characteristic activity pattern as well as a “voice”. Most remarkable is that the sounds which emanate from these electronic nervous systems seem to convey strong emotional meaning to listeners.

We were delighted to hear people tell us that the Tonalities in Forbidden Planet remind them of what their dreams sound like.

There were no synthesizers or traditions of electronic music when we scored this film, and therefore we were free to explore “terra incognito” with all its surprises and adventures.

You can listen to the Bebe Barron interview via the embed below, or via the Internet Archive:

The interview was originally broadcast 2000 for the Spinner Sanctum Electronaganza, a show within a show on the Musical Transportation Spree.