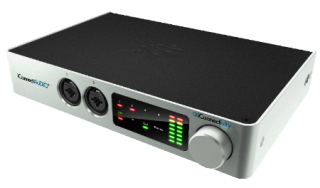 At Musikmesse 2016: Interface-maker iConnectivity has announced that the iConnectAUDIO2+, the latest in their series of audio and MIDI interfaces for Mac, PC, and iOS, is now shipping.

The most-used functions on the interface can be controlled from its touch panel, and iConnectivity’s iConfig software for iOS, MAC, and PC is included for setting up flexible audio and MIDI routing. Snapshots are then stored in flash memory on the device.

Here’s the video for the iConnectAUDIO2+, from its introduction at the 2016 Winter NAMM Show:

iConnectAUDIO2+ will be on display this week at the 2016 Musikmesse in Frankfurt, Germany.

Pricing and Availability. iConnectAUDIO2+ is available now and retails at an estimated street price of $199.99 US at iConnectivity resellers worldwide. For more information, check out the iConnectivity website.

7 thoughts on “iConnectAUDIO2+, 2-in, 6-out Audio and MIDI Interface, Now Shipping”