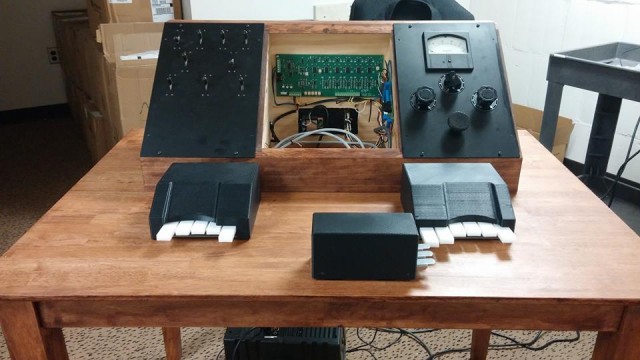 The new VODER is going to be played later this month as part of the Human Digital Orchestra during the (invitation-only) First Shannon Conference on the Future of the Information Age at Bell Labs in New Jersey.  The conference is being billed as a celebration of the centennial of Claude Shannon’s birth, whose early information-theory concepts “form the basis of many of today’s digital computing and transmission techniques.” The VODER will be played by SSL’s founder, Doug Slocum. 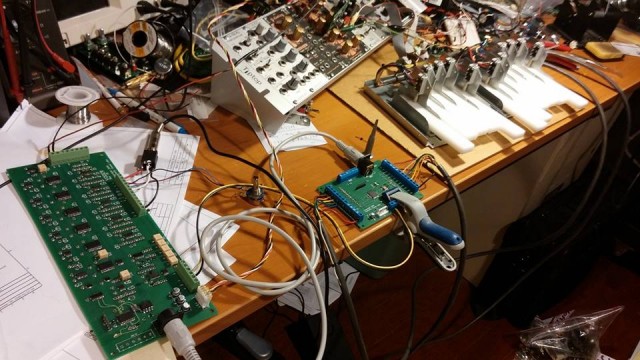 “I’ve been working closely with folks at Bell Labs here in New Jersey to put together the “First Shannon Conference on the Future of the Information Age” at the end of April. I’ve created a modern-day version of the VODER that was demonstrated nearly 80 years ago at the 1939 Worlds Fair.“

The VODER was the result of 1930’s research, conducted at Bell Labs, into speech compression and security. The original VODER device consisted of a tall rack of coils and vacuum tubes, which connected to an operator’s console with switches, controls and keys that loosely resembled vintage stenotype machines. “Highly-trained” operators would “play” combinations of the keys, in specific sequences and timings, to approximate the human vocal tract to “pronounce” words, phrases and even sing. Several expert operators trained for nearly a year to become proficient enough to perform at the Worlds Fairs. 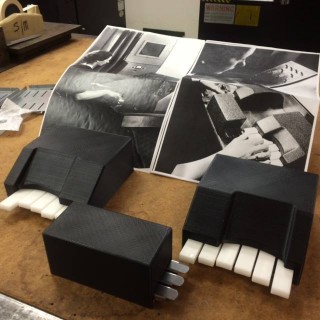 Two of the original racks used for operator training were recently uncovered at the AT&T Archives in New Jersey, and one will be on display at the Shannon event, alongside the modern VODER console.

A small Bell Labs team, working with Synthetic Sound Labs, has taken the small amount of information on the construction of the original VODER, and the team was able to closely model the operator console of the original from photographs.

The modern electronics developed by SSL feature a custom analog 10 band filter bank, driven by a noise source and a voltage-controlled sawtooth oscillator. The volume level for each of the filter bands is under digital control from a separate custom MIDI controller which reads special spring loaded potentiometers and micro switches.

Here’s a video demo of the original 1939 VODER in action:

More information about the VODER and the Human Digital Orchestra is available at this link, and details about the Shannon Conference is here.