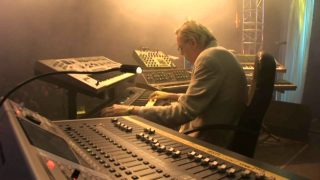 Klaus Schulze‘s June 9th concert in Poland – billed as his final concert – has been cancelled, because of his poor health.

Tickets for the event were reportedly sold out.

The news was announced at his official site:

Sad news: The concert on 9 June 2016 in Stettin/Szczecin has to be cancelled because of medical reasons. The state of health will not improve in the foreseeable future.

Klaus Schulze is in constant medical treatment. (Which is, more or less, the translation from the medical certificate.)

I dare suggest that the composer would do himself and his music an immediate and eventual service by total, resolute and voluntary withdrawal from this public world to one of private performance and electronic media.