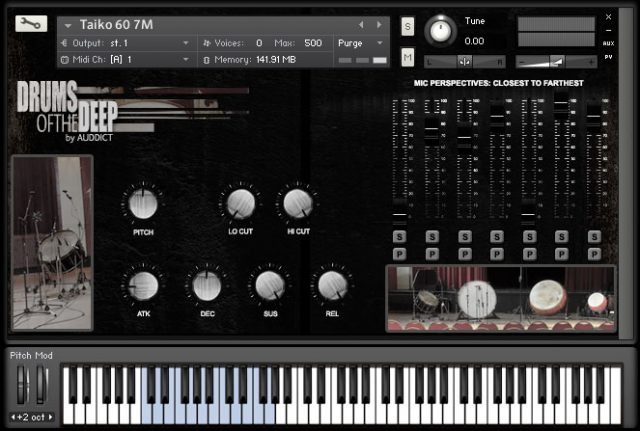 Auddict has released “Drums of the Deep,” which they are calling “the ultimate drum library.”

The Kontakt sample library, compatible with version 4 and up, is a collection of drums ranging from small to “earth-shudderingly huge.”

The three-mic position version is our own professionally-produced version, with a CLOSE, MID and FAR perspective, each carefully produced from a number of mics placed around the drums by us, in a manner that really brings out the character of each instrument.

The seven mic position option is different, in the sense that it includes seven direct mic feeds (un-produced), with perspectives in order from close to distant, so that you can also go deeper into the sound than just three perspectives, and carefully tailor the sound to your purposes.

This demonstration video runs through several 3M (three-mike) examples, and compares them to 7M (you guessed it, seven-mike) examples:

Drums included in the library:

They explain further, “[e]ach instrument was sampled to ensure the realized music/playback is as natural and versatile as possible, so dynamic layers are numerous (up to seven) as are round robins (up to seven per dynamic layer).

Pricing and Availability. Auddict’s “Drums of the Deep” sample library for Kontakt is available now, via the Auddict website. Regularly priced at $100, the library is offered at an introductory price of £50.00 (GBP). For more information, samples, and system requirements, go to the Auddict website.