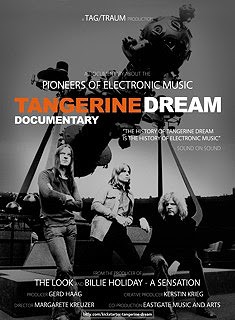 The Kickstarter project for a new documentary about Tangerine Dream is now live.

Here’s what the producers TAG/TRAUM have to say about the project:

We want to explore the world of Tangerine Dream for the first time in a feature-length documentary.

Our goal is to uncover the band’s musical evolution, their style and their philosophy behind their art.

For this reason we will depict the musical heritage of this revolutionary band and its visionary founder Edgar Froese. Furthermore we will show previously unpublished footage from Edgar’s private archive.

The producers have a goal to raise about $80,000 to help fund the project, They are already a quarter of the way towards their goal, after one day. A DVD of the documentary is available to backers for €25. See the project site for details.