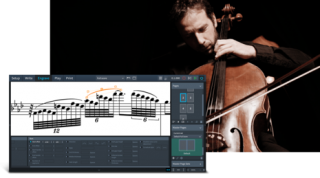 It’s named after Valerio Dorico, one of the most important music printers in 16th-century Rome.

Dorico provides the most flexible note input and editing functionality of any scoring application, including the ability to work entirely in open meter or to freely rebar existing music, while maintaining clear and unambiguous rhythmic notation at all times.

Only Dorico allows composers to experiment freely with musical ideas, including seamlessly inserting music within an existing passage, or changing the durations of existing notes, and have correct notation produced automatically after every step.

Dorico’s graphical output is intended to uphold the centuries-old craft of fine music engraving, with attention to even the smallest of details. Taking every subtlety into account, Dorico aims to fulfill the aesthetic demands of the most discerning engravers and publishers, providing extensive capabilities for graphical tweaking and editing.

Dorico’s multi-threaded architecture makes the software smooth and responsive, even when working on large-scale projects. Building on Steinberg’s audio engine, Dorico comes with a host of sumptuous VST instruments and effects, including HALion Sonic SE and the entire HALion Symphonic Orchestra library.

Dorico will be available in the fourth quarter of 2016 for 579 Euro, or 349 Euro education pricing. A special crossgrade offer for qualifying Sibelius and Finale users will also be available for 299 EUR.