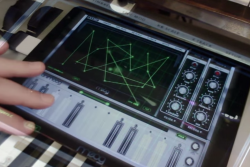 Animoog for iPad is available for US $29.99 in the App Store.

We are the music makers… and we are the dreamers of dreams.