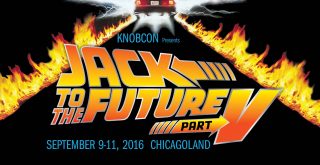 The event, one of the largest synth-focused conventions in the world, will feature three days of pure, unadulterated synth + electronic music action.

We talked with organizer Suit and Tie Guy (of STG Soundlabs) to ask him what people should expect at this year’s event, and it sounds like Knobcon V will be bigger, better and synthier than ever:

Synthtopia: How would you describe Knobcon to somebody who’s never attended?

Suit & Tie Guy: Knobcon is an immersive weekend of instruments, music, and people.

It is also the world’s only synthesizer convention. It is a building full of people, who live all over the world and for one weekend, every year, meet to discuss, enjoy, and celebrate electronic music instruments, the music we make with them, and the impact they’ve had on our lives.

Suit & Tie Guy: We have more of everything. I think there will be 600 people attending this year.

Beyond that, we also have two new “jam rooms” for attendees. The Chill-Out Room for downtempo stuff, and the Bug-Out Bunker for noise music.

Synthtopia: It sounds like synths from several large manufacturers will be making their debut at Knobcon this year. Can you give us a preview of what to expect?

Suit & Tie Guy: There have been some fantastic new devices announced and teased by our exhibitors, from the one-man operations all the way up to the multi-nationals. Rest assured, they will be bringing them!

I hesitate to name anything in particular, because as the organizer, I don’t wish to play favorites. But Behringer have told me I can use the DeepMind 12 during my set at the Friday night reception, so that one will definitely be there. I’m really flattered they are bringing more gear to Knobcon this year than they did to the NAMM show in January!

Synthtopia: What are you most excited about for this year’s Knobcon?

Suit & Tie Guy: Seeing everyone again. I don’t know what I’d do without this experience.

Knobcon V is being held Sept 9-11, 2016 in Chicagoland. The event, one of the largest synth-focused conventions in the world, will feature synths and electronic music over three days:

Knobcon registration is $35 per person. The Saturday banquet is an addition $50 per person. See the Knobcon site for details.

4 thoughts on “Knobcon V Synth Convention Promises ‘More Of Everything’”