In the video above, Roger Linn offers an in-depth look at the new mode and its capabilities. 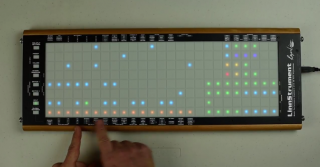 The Step Sequencer captures the wide range of expression that the LinnStrument is capable of.

Each of LinnStrument’s two splits can have four sequences, one of which may play at a time. You can turn on the sequencer in both splits, to play two simultaneous sequencer tracks, or you can use a sequencer in one split, and play live on the the LinnStrument with the other split.

Each step in a sequence can have four notes. And each note has velocity, pitch offset, duration and y axis data that you can tweak.

In addition to the features for creating sequences, the Step Sequencer is also for live performance and expressive sequence control.