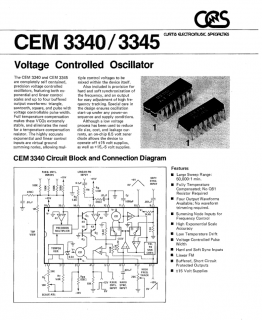 While Behringer has recently announced plans to clone everything synth-related, not everyone is enamored with the company’s cloning plans.

Curtis pioneered the use of custom integrated circuits for synthesis. By developing complete VCO and VCF chips, Curtis streamlined the manufacturing of synthesizers, making them them more reliable and more affordable. The work of Doug Curtis helped make polyphonic synthesizers feasible.

While Doug Curtis died in 2007, his family recently re-released the CEM 3340 VCO and has been working to release other classic designs to meet growing demand. And they take issue with Behringer’s clones.

Many of you who are active on synth forums have recently contacted us regarding another company’s claim of producing VCO chips that are the equivalent to the CEM3340 that was used in many legendary synthesizers.

To avoid any confusion, please know that there is only one manufacturer of the authentic CEM3340 designed by my late husband, Doug Curtis. Any claims, use of this product designation, and use of the name Curtis Electromusic by other companies are made without permission from OnChip Systems (our current company name) or the Curtis Family.

As much as Doug would be humbled and so very happy about the legacy his products enjoy, we can assure you that as a person of the highest integrity he would be deeply saddened by the attempt of others to trade on his name and to make unsubstantiated claims of equivalency to his original inventions.

In his loving memory and gratitude for the community of musicians and synthesizer enthusiasts, Doug’s family is committed to making his authentic designs available as demand presents itself. Thank you for your continued support of Doug’s analog synthesizer legacy.

Mary Curtis and our daughters, Ashley and Julia