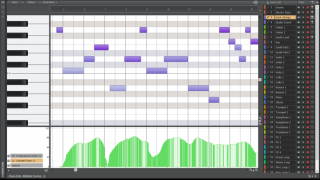 Cakewalk has released an update for SONAR, their flagship DAW, that supports wireless, low-latency Bluetooth MIDI and enhances MIDI functionality by modernizing the Piano Roll View, Track Pane, and Controller Pane to take advantage of the expressiveness and playability of modern virtual instruments.

Cakewalk worked closely with both Microsoft and Zivix on the implementation. “Our jamstik+ SmartGuitar was built for wireless operation, and the native implementation in SONAR makes it possible for PC users to play the way we designed the jamstik+ to be played,” said Chris Heille, Zivix Senior Music Product Specialist. “We are delighted to have worked with Cakewalk to bring one of the first true wireless BLE-MIDI experiences to the PC.”

Through a redesign of the Piano Roll View, Track Pane and Controller Pane, SONAR now better addresses the needs of modern MIDI music production. According to Cakewalk Senior Software Engineer Bob Currie, “Virtual instruments are more powerful and more expressive than ever. The creative possibilities are nearly endless and continue to evolve. All of this demands more powerful tools and efficient new workflows in applications like SONAR.”

With the SONAR 2017.03 update, it’s easier to choose tracks for editing, see multiple tracks or controllers, lock editing to specific tracks to avoid accidental edits on other tracks, and edit controllers with extreme precision in the new Single Lane Mode. Color-coding relates tracks to data for easy identification in complex projects, and the redesigned Track Pane displays twice as many tracks in the same amount of space as before. It’s even possible to use SONAR’s unique Smart Swipe feature to select, mute, solo, or arm multiple tracks with a single, quick swiping gesture.

For easy alignment of controller data with notes, the Aim Assist function now extends into the Controller pane. Subtle color shadings distinguish sharps from flats, while the popular and useful Tab-to-Transients feature in the Track View now works with notes in the Piano Roll View.

The SONAR 2017.03 update is a free download from the Cakewalk Command Center for all current SONAR Artist, Professional, and Platinum customers. All three versions are available globally through music and sound retailers as well as Valve’s Steam Store and the Cakewalk Store. See the Cakewalk site for details.