Filmmaker Stuart Acker Holt has released a short documentary, “CRUMB 2.0,” tracing connections and creative inspirations from one artist to another.

Filmed last fall during Ableton‘s 2016 Loop Summit, the mini-documentary illuminates the “unseen connections” between creative individuals. The Funkhaus (originally the headquarters of East German state radio), where Loop was held last year, provides a quirky architectural and sonic backdrop for the artists’ musical performances and stories about the origins and inspirations of their art. 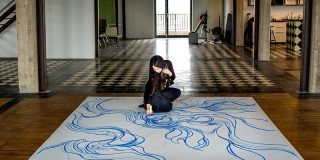 The “chain of inspiration” begins with multi-media artist Sougwen Chung, and ultimately leads to reggae and dub pioneer Lee ‘Scratch’ Perry. Along the way, you’ll meet Daedelus, Jace Clayton (and violist Jeanann Dara) and Deantoni Parks, exploring how each artist works and learn about their creative motivations.

Ableton recently announced that Loop 2017, their annual summit for music makers, will return to Berlin on November 10–12. This year’s program will feature discussions, performances, studio sessions, interactive workshops and more. The full program and list of participants, presenters and performers for Loop 2017 – including the night program – will be announced in July.

Online registration for Loop tickets is now open. Because of limited capacity at Loop, tickets are allocated via a lottery. Organizers told us that the event be open to more attendees this year, to help meet demand.