This video, via Erica Synths, features Jean-Michel Jarre in his Paris studio.

Jarre discusses inspiration, creativity, synths and the future of electronic music. And the second half of the video captures a studio jam seesion between Jarre & Kodek.

“My first source of inspiration in my life, since I was a student, is the gear – the technology and the instruments,” notes Jarre. 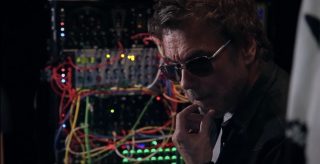 “Lots of people think that electronic music is cold and robotic. It’s not at all cerebral or intellectual….it’s exactly the reverse,” adds Jarre.  “I am born in France in Lyon, in the capital of cooking. We love cooking and, for me, electronic music is like cooking. Cooking loops, beats, frequencies and waveforms in a very tactile and sensual way.”

“When you have all these knobs and this fantastic interface between the sound you have in mind or the sound you don’t have in mind, but you are going to discover, and yourself….it is something that is much more direct than a score with a piece paper. Because, when you think of it, this is a very intellectual and cerebral approach of music.”