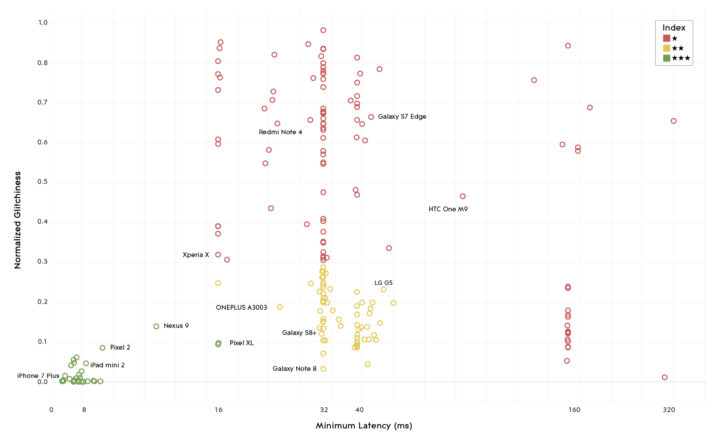 Android owners wondering why there aren’t more music apps being developed for the platform may want to check out the Mobile Audio Quality Index, an analysis of audio quality on mobile devices.

Based on testing of over 200 devices:

The above chart graphs devices based on Glitchiness and Minimum Latency. Devices with the best performance appear in the lower left corner.

On Android, only four devices achieved that level: Google’s Pixel, Pixel 2 and Pixel XL and the HTC Nexus 9.

The MAQ is a statistical analysis of user generated data on mobile devices, and focuses on the latency and glitchiness of audio on the devices. The MAQ is designed to provide developers and consumers insight into the devices best able to run audio apps.

Based on MAQ stats, devices from Apple & Google are suitable for live audio use, and devices from other manufacturers generally are likely to have glitchiness and latency that makes them unsuitable.

Check out the info at the MAQ Index and let us know what you think!

When you study music in the classical system, you are always on the inside. When someone is composing a song, they write in C minor, or with a diminished seventh… to offset that, you need a lateral approach.