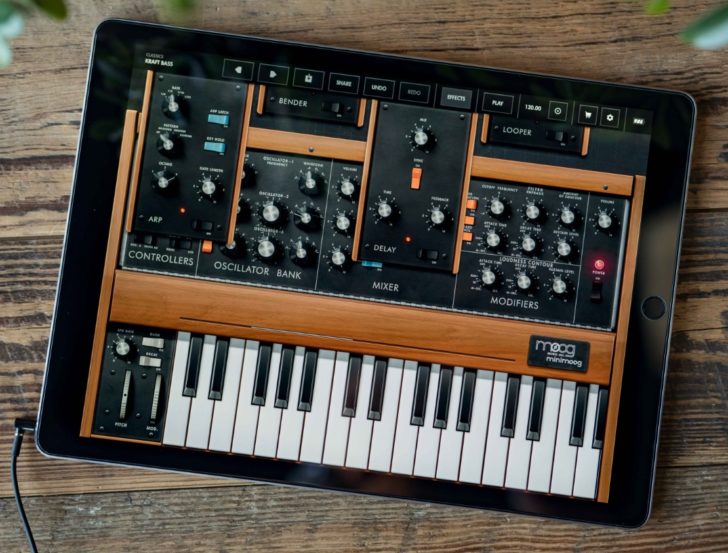 The Minimoog Model D app was created by Moog for iPad, iPhone and iPod touch. It’s hardware-intensive, so it requires a 64-bit iOS device.

The Minimoog Model D app is designed to work standalone or within mobile DAWs. With AUv3 Audio Unit extension support, multiple instances of Model D can be used simultaneously within iOS apps like Apple’s GarageBand.

We talked with Geert Bevin, Senior Software Engineer at Moog Music, about the new Model D app, why it’s for iOS only and how he sees the app being used in electronic music workflows:

Synthtopia: There have been previous software recreations of the Minimoog. Why is Moog bringing out the Minimoog Model D app now?

Geert Bevin: One of the things we really wanted was for it to sound incredibly good – to sound very, very close to the real hardware Minimoog Model D.

One of the reasons that this is coming out now is because we needed the horsepower to do that. It needs 64-bit devices. We tried it out with Model 15 and then moved on from there, to trying to really nail the sound with the Model D.

The other reason is, given the status of the Model D, we really wanted to give everyone the opportunity to experience it. Both in visuals – so staying close to what the original emanates, down to the grain of the wood, to how the reflection of the surface behaves under the light that’s falling on it, to really bring that legacy of the synthesizer across – and then to bring it further, with what is possible in mobile devices now. So, it’s polyphonic and we’ve added a bunch of effects that make sense for it. You’ve got patch sharing, which was not possible before.

And it’s really accessible. So it’s going to be $4.99 at introduction, which is a really low barrier. And it runs on all devices, from the small iPod touch to the big 12″ iPad Pro.

Synthtopia: What was your process for getting the Minimoog sound right as an app?

Geert Bevin: We decided to make a new Model D, not a vintage one, but to base it on the reissue we did in 2016, which added a few new features, like the LFO modes and a different way of handling the modulation.

It all starts with measurements and analysis: just focus on individual components in a real analog Model D, measure it all, put it through an oscilloscope, get spectrographs. Have it all laid out, so you see what happens.

This revealed quite a few things that were surprising to me. Like how the envelopes behaved, like how some of the oscillators are actually reversed when they come back through the modulation path. So getting a view of how it actually behaves, as opposed to how you think it happens.

A lot of people in the company pitched in, because they know the Model D very well, obviously. So listening to it, comparing various iterations of the instrument.

One thing that took a completely different approach was the actual feedback path – where you have the external audio which is normalized to the output of the mains. That’s really, really hard to do in DSP, because you have a buffer size which prevents you from having a real feedback path. Because of latency, you don’t get the same behavior.

If you would naïvely just hook it up at the end of the sound and put it back into the mixer, you’d get the latency of the buffer, which gets you into phase problems, comb-filtering and things that don’t sound like the original at all.

So we reevaluated how that behaved and tried to capture what makes that external normalization feedback path interesting. Part of that is that the sound starts to saturate in a very pleasing way, where the bass stays present. It also thickens the sound a lot, sort of spreads it out a little bit, so it becomes stronger but more pronounced.

So what we actually did was design a whole separate signal path, that runs in parallel, but behaves slightly different and very close to what would happen if it were routed in analog. It’s almost like you’ve got two synthesizers, running next to each other, just for that external feedback path.

Synthtopia: What can you tell us about MPE in the Minimoog Model D app?

Geert Bevin: MPE support is currently two dimensional, individual pitch for each touch and individual timbre control. It’s based on the implementation in Model 15. It does all the per-channel stuff of MPE, so whenever a note comes in on a MIDI channel, all the expression on that channel will be tied to that note.

What it doesn’t do is the master channel that MPE has, where you’ve got one main channel where any changes you have there are pushed to all channels. If you have like a global pitch bend, it doesn’t do that. It also does not support the MPE activation message, because the spec is not published yet.

In practice, if you have an MPE MIDI controller and turn it on to MPE mode, Model D will get the NRPN pitch bend range message and automatically set up the pitch bend range. Then you have to manually select the MIDI input channels and set it to MPE, instead of Omni or a specific numbered MIDI channel.

Synthtopia: Moog’s iOS synths are some of the most professional ones available. Why aren’t you making them available for desktop computers?

Geert Bevin: We get a lot of requests for it. The main thing there is that we’re still getting into the software aspect of things. We are a small company. We have limited resources. And we try to deliver quality products every time.

By focusing on one platform (iOS), it is a walled garden, but it has the advantage that it is a known walled garden. We know exactly what we have to test.

So, we have all of the devices. We actually open it up on all the devices and see if it behaves right, if it feels great, if it responds correctly, if it loads quickly. Everything about the app, we test on the actual device, because that is how the user will experience it.

It’s going to be a lot of work, if we go to other platforms. It doesn’t meant we won’t do it, but we’re going to need a lot of additional resources. We’re in the process of discovering how we can move through this software world, while building synths in the way we build them, which is with a lot of love and care and attention to detail. 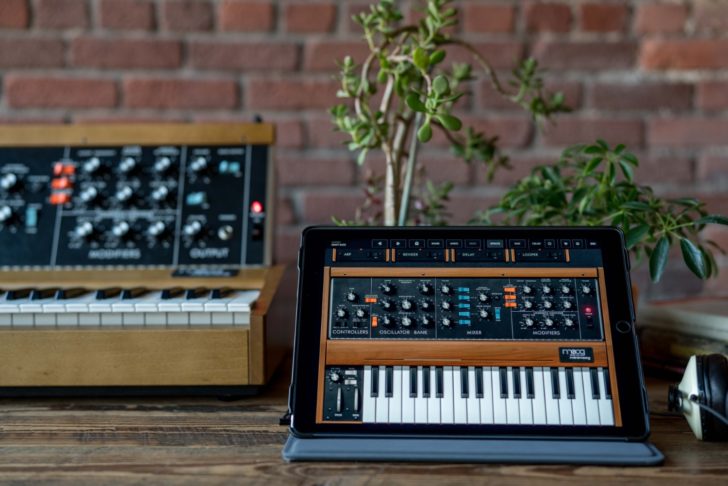 We also talked with Bevin about using the Model D app in music production workflows. He said that there are now a variety of options for integrating the Minimoog Model D app into your workflow:

Minimoog Model D is available for iOS with an introductory price of US $4.99. In addition, Moog Music’s other apps are also currently on sale: