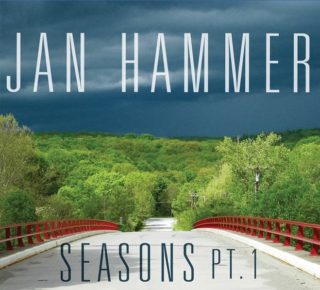 Synthesist and composer Jan Hammer let us know that he’s got a new album on the way, after a nearly 10 year-long hiatus.

Hammer – whose work ranges from fusion jazz to the iconic 80s soundtrack, Miami Vice – will release Seasons Pt. 1, a album of new compositions.

“I’ve actually been thinking about releasing something new for six or seven years,” he continues. “This is what happens – musical ideas had accumulated in my head over time until I suddenly realized that I had more than enough for an album.” In fact, Hammer says that he’s already at work developing sketches for a follow up album.

Hammer cites influences as far ranging as the varied strains of the music he grew up with to what he calls “the elephant in the room” – his four seasons scoring Miami Vice.

“I really had these residual feelings of unfinished business,” says Hammer. “I’m proud of the work I did for the show, and there are echoes of that music that continue to resonate for me.”

Hammer himself describes the new album as “cinematic.” The opening track, Miami – Night, was inspired by Miami Vice director Michael Mann’s technique of spraying the streets with water when taping at night to set the mood for a scene.

“When I wrote Miami – Night, explains Hammer, “it felt like I was creating an opening scene in a screenplay.”

See our Jan Hammer Interview: Mahavishnu, Miami Vice and More for some of the stories behind Hammer’s music.

14 thoughts on “Jan Hammer To Release First Album In A Decade, Seasons Pt. 1”