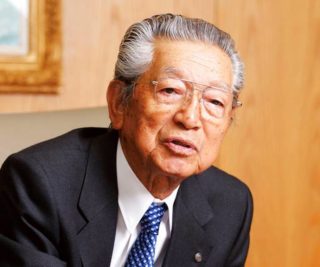 Kazuo Kashio, one of the four brothers who founded the consumer electronics and synthesizer manufacturer, Casio Computer Co., has died at age 89, the company said earlier today.

Mr. Kashio, who was chairman and served previously as president, died at a Tokyo hospital on Monday of aspiration pneumonia.

A Wall Street Journal article credits Mr. Kashio with making the calculator a ubiquitous product through Casio Mini. He also helped popularize the G-Shock watch, which had its commercial debut in 1983.

Kazuo Kashio succeeded his older brother Tadao, who served as Casio’s second president. The first president was the brothers’ father.

The Kashio family founded the Japanese electronics-maker in 1957, and commercialized the world’s first all-electric compact calculator.

The Sacramento Bee reports that Kazuo Kashio’s motto was that a company must keep reinventing itself to survive, pursuing “continual change.”

“By breaking free from preconceptions and conventional notions, we have conceived products that are truly needed and used our digital technologies to make them a reality,” he said in one of his messages as chairman. “Products based on new ideas create new markets.”

Kazuo Kashio is survived by his wife Soko and two daughters and a son, Casio President Kazuhiro Kashio.