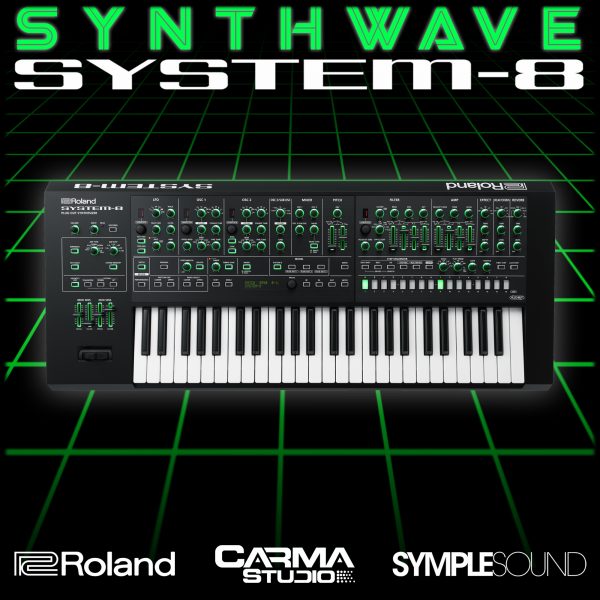 Carma Studio and Symplesound have announced the release of Synthwave for System-8, a collection of 96 presets for both the Roland System-8 and Roland Cloud software synthesizers.

This first collaboration between Symplesound and Carma Studio (aka acclaimed sound designer Francis Preve and sample library legend Jim Stout) is available as a single bundle for multiple products.

Synthwave builds on the “iconic” sound of the Jupiter-8 and Juno 106, bringing the sounds of the 80s and early 90s to Roland’s System-8 supersynth. Created for music-making in genres ranging from Retronica/ Synthwave to Indie Chill to Future Funk and Intelligent Trap, the Synthwave pack also includes an additional 32 presets that utilize the System-8’s AIRA engine. Finally, the product is also fully compatible with Roland Cloud.

The presets in the Synthwave collection lean heavily on the System-8’s authentic analog sound and include 106 basses, Jupiter pads, AIRA leads, and “arpeggio-ready” plucks that can be easily tweaked right from the front panel, or automated within the user’s DAW, via the plug-outs. Patches from classic hits are also sprinkled throughout the collection, as the developers say, “for added street cred.”

Furthermore, every synth in the Synthwave collection features a set of templates for bass, pad, lead, and plucks, so users can quickly create their own custom patches, without erasing the original presets.

Pricing and Availability. Synthwave for System-8 is available today for $19.95 via the Carma Studio website as well as via Beatport, Reverb, and Soundtrack Loops webstores. Additional information, including sound sample demonstrations, at this link.