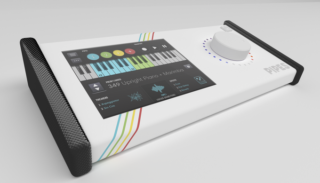 Synesthesia has passed its funding goal for the Pipes Kickstarter project, and they have added two new stretch goals: multiple audio outs and analog in.

The Pipes is a new audio platform that they say “out-horsepowers a laptop, outperforms any sample player, and is built to get even better over time.”

Production of the Pipes is being funded via a Kickstarter project, and it’s available to project backers starting at US $399. The project has already met its funding goal.