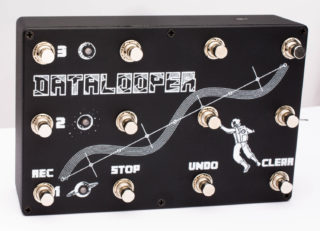 He’s funding production of the new controller via an IndieGoGo project, and is already close to his funding goal, with a little over two weeks left in the campaign.

DataLooper is one of two Live loop controllers that debuted at Loop 2018, along with the independently developed State Of The Loop.

We asked Cimo to tell us more about his new Live controller and what he sees as its strengths.

Synthtopia: You recently launched an IndieGoGO project for the DataLooper. For people that aren’t familiar with it yet, what’s your ‘elevator pitch’ for DataLooper?

Vince Cimo: Ableton Live is amazing software, but it’s a pain to use as an ‘instrument’ if your hands are tied up. Controllers like the Push are amazing, but again, you need your hands.

DataLooper gives you a totally new set of workflows that allow you to ‘play’ Ableton with your feet. It can emulate a hardware looper using the Ableton Looper device (complete with tempo recalculation, non-quantized start and stop if you like), control session view (automatically detecting unused clip slots and mapping the controls) and launch scenes.

Synthtopia: What do you see as the key features of DataLooper?

Vince Cimo: They include: 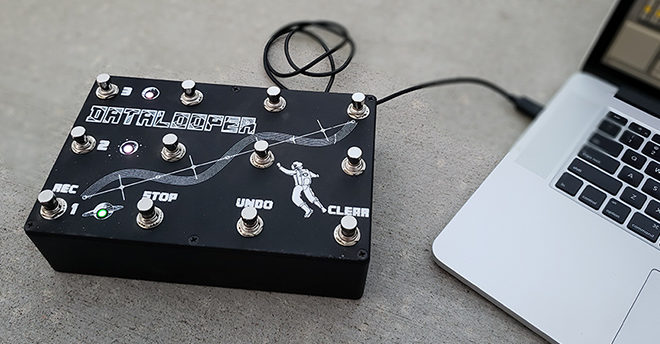 Synthtopia:  Tell us about performance setups and workflows with DataLooper. What do users need and how does it all hook together?

Vince Cimo: In general, all that is required is Ableton and a DataLooper. If you’re looping audio, you need an audio interface (Behringer UMC404HD is a cheap but powerful one) to get signals into and out of Ableton.

The way DataLooper works is via a track naming convention. The software scans the tracks and if it finds a track with “DL#” or “CL#” in the name, it knows to link up. DL# indicates that there is a looper device on the track, whereas CL# links the pedal up to the clip slots. 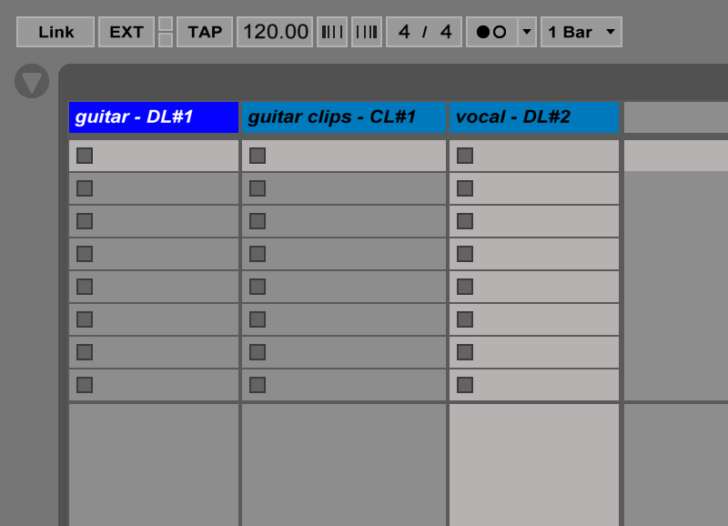 To make the DL# work, you just need to drop an instance of the Ableton Looper on the track and map the Rec/Stop/Undo and Clear buttons and that’s it. CL# tracks require no MIDI mapping. The software will automatically find the next available clip slot and automap the Rec/Stop/Undo/Clear controls.

Here are a couple of scenarios for performance sets:

Synthtopia: You debuted DataLooper at Loop 2018. What was the feedback you got from attendees?

Vince Cimo: My impression was that the community has wanted something like this for a long time, but no one has taken the steps to get it to market. Hell…I get it, it’s a ton of work!

Synthtopia: What’s your background and what led you to want to create the DataLooper?

Vince Cimo:  I’ve been a musician most of my life, starting with classical piano when I was very young. I’ve also been the guy that the neighborhood calls when their printer breaks. My brother tells me that I’m half computer.

I have a degree in design and then worked for Samsung as a Java programmer for years. Eventually I realized that I just needed to do music full time. I really like the possibilities Ableton offers, but was always frustrated with generic pedals like the FCB1010 and the Soft Step, so I figured I’d apply my skill set and make something cool.

Synthtopia: I noticed that at least part of the project will be open source. What’s going to be open source – is that just the software or will it be the hardware design, too?

Vince Cimo: All of it.

The software is doing most of the heavy lifting though. There’s so few resources on the Ableton API, but it’s a pretty powerful tool so I’d like to really help the community make more cool shit with it. I figure releasing my software in tandem with explaining what’s going on in video will be a cool offering for people.

My goal with this is to push the boundaries of music….money is nice, but I only really need so much.

Synthtopia: There’s another Ableton pedal project, KB Devices’ State Of The Loop, that launched at about the same time as your project. So it looks like Live users are going to have two new MIDI pedal options.

The two designs are very different, though, so I’m wondering if you had thoughts on what sort of workflows or what types of users the DataLooper will be the best fit for? 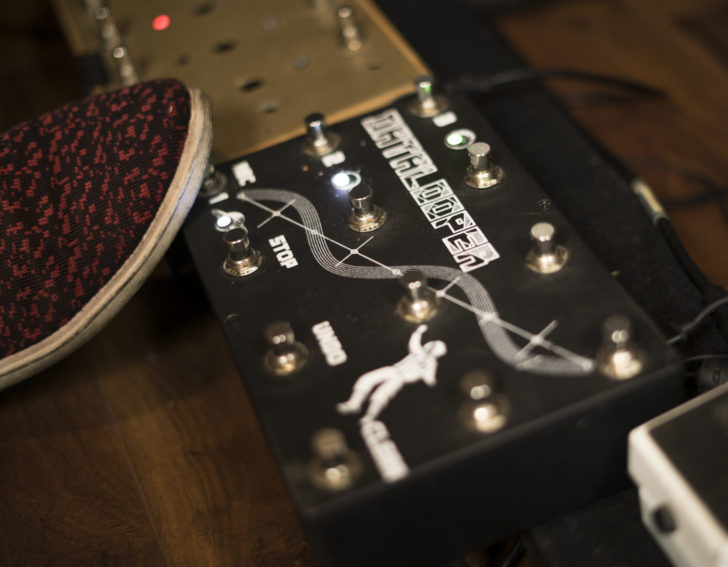 Vince Cimo: (laughing) Yes, Pierre and I nearly gave each other heart attacks.

We’ve both been working on our solutions in isolation for about two years and posted about our projects on the same day. I actually met Pierre at Loop…good guy. I think I’m going to reach out and try to do some collaborative software after this whole thing is done.

Regarding choosing between the two, they really are different. I’m partial to mine because I don’t fully trust Max 4 Live in the performance setting and I don’t like menus. Also, in my performances I don’t like to listen to a click.

DataLooper has a way to recalculate the tempo like a hardware looper, so I can just start from scratch, but keep session recording. You can’t do that with State of the Loop. I also really like the UX on my session control mode…I spent a ton of time tweaking to make it super easy to record scenes and generate ideas quickly.

One really cool thing about Pierre’s project, though, is the way he’s implemented expression pedal support. If you’re someone that uses a lot of expression pedals, it’s a pretty cool feature.

Synthtopia: Your project is already well on the way to your funding goal, with several weeks left to go. So it seems that the project is likely to get funded. What happens after it gets funded?

After the completion of the campaign, I’m planning on conferring with my backers and taking all of their feedback into consideration. I’m allowing about 3 weeks for any final design changes based on user desire.

I’ll also be beta testing the config software. I’m in the process of rewriting it so it’s web based. The idea is that users can post ‘macros’ of Ableton API functions via an online interface that people can drop onto one of their DataLooper buttons. Then it’s just careful assembling of everything.

I’ve established relationships with factories and machine shops over the course of the prototyping phase, so I imagine everything running pretty smooth. I’ve given myself until March, but realistically I hope to have the units shipped out by the end of January.

Synthtopia: For people that may be interested in DataLooper, but don’t want to do a crowdfunding project, do you have plans for making it available after the project is complete?

Vince Cimo: I’m going to double whatever number of sold units there are and keep a stock for people to purchase, but the price will go up. The margins on the Indiegogo campaign are pretty small and it’s really just a way to see if it’s a valid product. Get it now and save yourself $80!

Synthtopia: Vince – thanks for taking the time to tell us more about your project!

Vince Cimo: Thanks for taking the time to digest all this info! Happy Holidays 🙂

DataLooper is being funded via an IndieGoGo crowdfunding campaign, and is available to backers starting at $199. You can find out more at the project site.