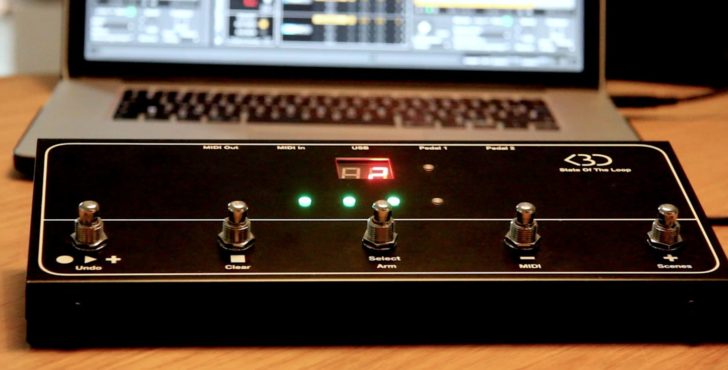 At Ableton Loop 2018, held Nov 9-11 in LA, two new hardware pedal controllers for Live made their debut, DataLooper and State Of The Loop.

Both projects are being developed via crowdfunding projects, with DataLooper on IndieGoGo and State Of The Loop on Kickstarter. You can find out DataLooper in our interview with creator Vince Cimo.

The State Of The Loop pedal was created by French engineer and musician Pierre-Antoine Grison, who performs as Krazy Baldhead. Grison is also an Ableton-Certified Trainer.

In this interview, we ask developer Pierre-Antoine Grison about his new pedal controller for Live, State Of The Loop, and what he sees as its strengths.

Synthtopia: You recently launched a Kickstarter project for the State Of The Loop. For people that aren’t familiar with your pedal yet, can you give us a quick summary of it?

Pierre-Antoine Grison: State Of The Loop is a pedal board, similar to what you find in most guitar player’s gear, except that instead of directly recording the sound, it connects to Ableton Live, like Ableton’s Push does.

This means that it will send information to Live about controlling some parameters and effects, but at the same time, it will receive information from Live and display it on the LEDs. This information can be, for example, how many Loopers are active, are they recording or playing, what is the color of the currently playing Scene, etc…

It may sound obvious, but there were no controllers that do that until now.

Synthtopia: What do you see as the key features of the pedal?

Pierre-Antoine Grison: There are many:

Synthtopia: Can you explain a performance setup and workflow with State Of The Loop? And what other hardware and software do users need?

Pierre-Antoine Grison: Basically, instead of loading a Looper in Live, you’ll load a preset that contains a Looper and a special Max For Live device.

Then Max For Live will do all the work of knowing how many Loopers there are, what are their state and so on. You’ll just use Live’s Looper as you would normally do, but with much more comfort.

Software-wise, the only thing that’s needed is Live Suite, which includes Max For Live.

Synthtopia: You introduced your pedal at Loop 2018. What was the feedback you got from attendees?

Pierre-Antoine Grison: It was tremendous.

I did a presentation of the pedal and got amazing feedback. Then I had the honor to do a demo to Gerhard Behles, Ableton’s CEO and to Jesse Terry, the creator of Push, and both were impressed.

I also managed to get it into the hands of live-looping artists such as Jacques, Rachel L Collier and Canblaster. All of them are now backers, which is a good sign!

Synthtopia: What’s your background in music and technology?

Pierre-Antoine Grison: I have carried an engineering degree and a masters of physics. This brought me to IRCAM (the Institute for Research and Coordination in Acoustics/Music), one of the biggest institutes for research on sound and computers. So that definitely helped me.

After I graduated, I decided to pursue an artists career, and I was lucky enough to join the Ed Banger Records label almost at the beginning, way before Justice or Breakbot became world famous.

This got me touring for about 10 years, learning a lot about being a musician and performing Live.

Being a geek and a bug-tracking maniac, I was invited by Ableton in 2005 as a “thank you” reward for my dedication, and that’s how the love story with Ableton started…

It is nice that everything converges back together with this project.

Synthtopia: What led you to create this project?

Pierre-Antoine Grison: The first time I realized there was something missing to control Live’s Looper was about 10 years ago, when playing with my Afro-electro band Donso.

The guitar player was asking to be able to loop himself, but he was on the other side of the stage, so there was no way he could see what he was doing. The hardware loopers were always drifting, so we just gave up.

Then about a year ago, I was training a guy from the staff of French singer Jain, and he showed me what she was experiencing on stage: playing to a crowd of 20,000, the computer on the side of the stage, and she was launching Live’s Looper with her APC40, hoping that it was recording. That’s when I decided I had to do something about it.

I also wanted to try building my own controllers, so that was the perfect project to start.

Synthtopia: There’s another Ableton pedal project, DataLooper, that also launched at Loop. The design is very different, though, so I’m wondering if you could share your thoughts on what sort of workflows or types of users your pedal will be the best fit for?

Pierre-Antoine Grison: Yes, can you believe it?  There’s no decent controller for years, and in the space of 2 weeks, 2 of them appear!

I met Vince Cimo, the creator of Datalooper, at Loop LA, and we both agreed how incredible this was. He’s a cool dude.

Anyway, there are differences to our products. I’d say mine is more oriented towards the stage: it’s got MIDI In and Out ports that allows you to have long distances, a robust USB socket, and its weight is really at the bottom.

Also, the Expression Pedal inputs and the possibility to launch scenes make it a complete solution for controlling a whole Live set, hands-free.

My idea with this controller was to get rid of the computer on stage.

Synthtopia: Your project is already 1/2 of the way to your funding goal, with two weeks left to go. If it gets funded, what happens next?

Pierre-Antoine Grison: First, I will place all the orders to launch production so that I can start shipping as expected. Then there will be an intense beta-testing phase, trying to get my prototypes in the hands of as many users as possible. But, it’s already pretty solid and reliable, so I’m not worried.

Synthtopia: Do you have any plans to make the pedal commercially available once the Kickstarter is complete?

Pierre-Antoine Grison: No, I don’t plan to release it on a large scale. I’d rather work on other concepts or provide custom solutions for artists.

To me, it’s a bit like when I make music: I love the creation process, not so much the post-release part. I already have other projects in the works.

Synthtopia: Pierre – thanks for taking the time to tell us more about your project!

Pierre-Antoine Grison: Thanks to you for supporting innovation and creators!

State Of The Loop Video Demo: