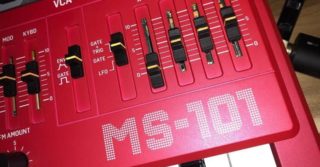 Behringer today announced the official availability of their MS-101 synthesizer, an updated clone of the classic Roland SH-101.

The MS-101 is already in the hands of many that had placed pre-0rders, though, and some have encountered problems with the new synth’s MIDI implementation.

CV gate in works in a proper way as long you don’t hit a key of the keyboard, then it plays strange sounds. you have to reboot it and then it works till you hit another key…

velocity out doesn’t send out a voltage.

the sequencer in Keyboard mode doesn’t transpose the sequence. I’ve done it like in the Beringer video. it was well explained and it doesn’t work.

hope there will be a update soon.

Forum moderator TC-Mike confirmed the issue, noting “I’ve passed this on to the synth development team and (will) update this thread once i have more infos.”

Update: Behringer head Uli Behringer has shared a statement, suggesting a fix is in the works:

“We have now created a firmware update and we’re planning to provide a test version to people affected by the bug. I suggest you drop me a PM with your email address so our engineering department can send you the update.

We have discovered that an internal memory overflow occurs when the sequencer is extensively used resulting in a subsequent disruption of the keyboard scanner since it’s all running on the same processor.

The new firmware should solve this issue but we would appreciate your help in verifying the firmware update.”

Update II: On the Music Tribe forum, a Behringer rep has announced that a fix is now in beta. The  release of the MS-101 firmware update is planned for next week. If you’re interested in testing the beta version, you can contact them via the forum.

Update III: A firmware update has officially been released and is available at the Behringer site. The update addresses multiple issues, including MIDI In not working, the sequencer not transposing, issues with GLIDE, problems with Velocity Out, problems with CV & Gate input, clock issues, keyboard dying and more. At least one MS-101 owner says that the firmware update ‘froze’ their synth; Behringer has a workaround at the Music Tribe forum.