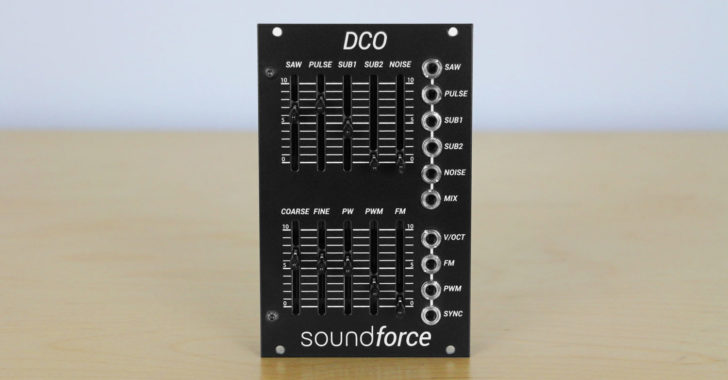 SoundForce has introduced its first Eurorack module, the SoundForce DCO.

The SoundForce DCO is an oscillator for Eurorack, based on the architecture of the Juno-60/106 oscillator section. They describe it as “a modern homage to that sound, using technology from the future.”

Here’s what SoundForce has to say about the technical details:

A DCO is not an all-analog VCO, but also not a digital oscillator. It’s a hybrid design that combines the best of both.

Similarly to some VCO’s, the DCO generates its core waveform, the saw wave, by charging a capacitor in an op-amp integrator configuration. A VCO will restart the waveform cycle when the signal has reached its maximum amplitude. But the DCO starts a new cycle when a micro-controller, a small computer chip, commands it to. The micro-controller also controls the rate at which the capacitor is charging, hence the frequency of the oscillator.

As with a digital oscillator, the DCO acquires the CV input voltages and turns them into numbers that will later set the frequency of the oscillator. This is done inside the micro-controller using 16 bits sigma-delta analog to digital converters.

All signals are true analog signals: the PULSE wave is derived from the SAW wave using a comparator and the SUB oscillators are generated using a flip-flop IC. Furthermore, the use of a very modern micro-controller with built-in 32 bits timers has improved the frequency accuracy a lot compared to the original design.

The module is available to pre-order at 229 euros incl. VAT (189 euros outside of Europe) via the SoundForce webshop. It is expected to ship in June.