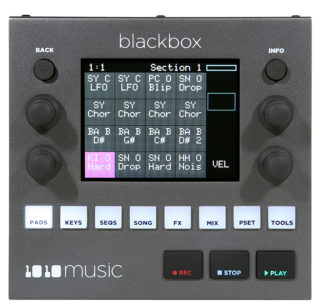 1010music let us know that they are now shipping Blackbox, their new, standalone sampling music workstation.

The Blackbox is a standalone sampler and groovebox that lets you record, save/load, apply effects and edit one-shot samples and beat-sliced loops.

You can record hours of audio and loops, and then record sequences by tapping on pads, playing a virtual keyboard or by playing an external MIDI controller. You can also create notes using the Piano Roll editor and touchscreen interface.

Sequences can be chained together to create songs. You can mix your arrangement using built-in stereo effects. And you can save sounds, sequences and songs as Presets for easy recall.

Blackbox is designed to compact and rugged for using on-the-go, but can also integrate with your studio gear, with MIDI I/O and Clock via USB and TRS, an audio input, three audio outputs, plus a Headphone/Stereo Output.

The microSD slot lets you expand memory to record up to hours of songs, jams, and performances. And Blackbox comes with gigabytes of premium samples and loops by SoundTrack Loops and Loopmasters.

Blackbox was introduced earlier this year at SynthPlex 2019, where designer Aaron Higgins gave us a quick intro:

Here’s an overview from Jason Donnelly of Soundtrack Loops, who helped create the Blackbox sound library: