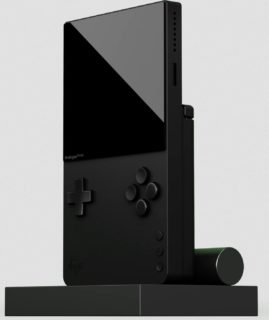 Analogue Pocket is a new multi-video-game-system portable handheld, with a built-in chiptune synthesizer and sequencer.

Pocket is compatible with the 2,780+ Game Boy, Game Boy Color & Game Boy Advance game cartridge library. But it’s built around two FPGAs (Field Programmable Gate Arrays), which means the hardware can be reconfigured almost like software. As a reasult, the platform is also compatible with cartridge adapters for other handheld systems, too, including Game Gear, Neo Geo Pocket Color, Atari Lynx & more.

Pocket also has a digital audio workstation built in called Nanoloop. It’s a synthesizer and a sequencer, designed for music creation and live performance.

Here’s an example of Nanoloop in action:

Along with Pocket, Analogue is introducing Dock, which lets you connect the Pocket to HDTV. It also supports wired USB controllers.

Analogue Pocket is expected to ship in 2020 for $199. See the Analogue site for details.