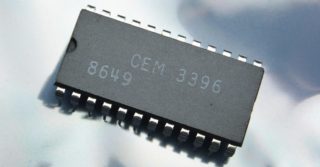 Behringer has announced that its Coolaudio sister company has cloned the Curtis CEM3396 Dual Wave Processor, an integrated circuit from the 1980’s that they describe as an ‘analog synth on a chip’.

The V3397 Analog Synthesizer-On-A-Chip, like the original, is designed to create a synth voice, with a minimum of external components, and to make it less expensive to create full-featured analog synthesizers.

Here’s what Behringer has to say about it:

The chip is an improved version of the Curtis CM3396 and will allow us to create high-performance analog poly synths in a very compact manner.”

Behringer has not officially announced any new synths based on the V3397 Analog Synthesizer-On-A-Chip, at this point, and details on the chip are still to come at the Coolaudio site.