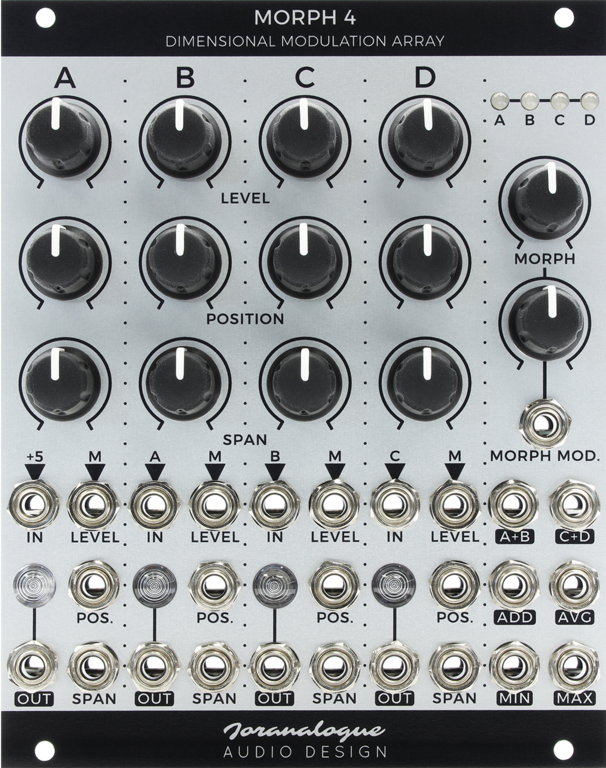 Designed as a fully-featured modulation hub for Eurorack synthesizers, Morph 4 is designed to take the basic concept of the multi-VCA module to the next level.

Four linear amplitude modulators are controlled by a master ‘morph’ parameter. The response of each modulator to this parameter is completely variable, both manually and under voltage control, and can be overridden if desired. Each response is triangular, with the ‘position’ parameter setting the maximum point along the morph axis, while ‘span’ determines the width of the triangle’s base.

You can use Morph 4 as a voltage controlled mixer, dual crossfader, dual panner, interpolating scanner, interpolating distributor, quad VCA, quadraphonic controller, slope modifier, rectifier, complex waveshaper or something in between any of those—the choice is yours.

Fold 6 is a wavefolder with a 6-stage hybrid series/parallel topology, to yield a greater sonic palette.\

Having both main (series) and alternate (parallel) outputs means a single module now gives access to just about all wavefolding tones imaginable.

To take things even further, an integrated symmetrical soft clipper limits the output signals to approximately 10 Vpp, keeping the amplitude within typical Eurorack levels and making it easier to create overdriven sounds at high fold ratios.

This clipping stage can be driven continuously using the shape parameter, smoothly transforming the folded waveforms into pulse waves for even more harmonic content.

Both modules are expected to enter production soon, with worldwide releases planned within the next few months. See the Joranalogue site for details.

One thought on “New Eurorack Modules From Joranalogue, Morph 4 & Fold 6”