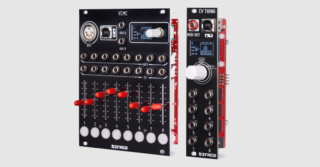 Befaco has introduced firmware 1.2 for the VCMC & CV Thing.

The new firmware adds new features like polyphonic mode, labeling of each control, 14 bit CCs, save memory expanded to four slots and a Web editor that lets you configure the modules and create your own presets.

The new code is shipping in the new units currently in production. The firmware can be upgraded, as the bin files are available in github. Also, the source code is available for those interested in customizing it.

Details are available at the Befaco site.