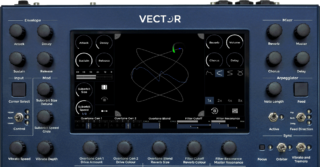 The Vector synthesizer – a digital hardware synthesizer produced in Prague, Czech Republic – has been updated to version 2.2.

The release builds on the recent versions 2.0 and 2.1, which introduced the Corner Matrix, for a more versatile configuration and placement of LP, HP and BP filters, increased polyphony to 16 voices, extended the orbiter with a new ADSR shape with separate envelope controls and more.

See the Vectorsynth site for details.

If you’re making things at home, there is no structure—no end, no beginning. So releasing stuff is a really nice way to have dividers in between what you do, and giving yourself a kick up the ass and saying, “OK, that’s the end of that period.”