Noise Engineering is best known for their Eurorack & MU synth modules, but they note that they can do things with plugins that they can’t with their modules – including presets, polyphony, MIDI control, patch recall and more. 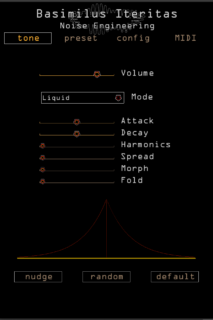 Here’s what they have to say about the new plugins:

“Basimilus Iteritas, for those who know our hardware, will be a familiar name. Based on the Basimilus Iteritas Alter module, the Basimilus Iteritas plugin features the parameters you’ll find on the module, plus some interesting additional options. Have you ever wondered what it would sound like to have two BIAs? Or ten?? Or thirty?? What about a polyphonic BIA? Well, now you can answer those questions!

As you can expect, the Basimilus Iteritas is designed for percussion. It’s the same additive/FM synth engine as in the module, so you can create some pretty awesome kicks and snares, as well as abstract metallic sounds like hats and sizzles. But it’s not just for percussion: it’s great for bass plucks, leads, stabs, pretty much any synthy thing you can think of. I’m a bit of a bass junky, personally, and the low end you can get out of this thing is seriously impressive.

And of course, just as the module responds wonderfully to CV modulation, the plugin is designed with automation in mind: slide those faders around and see what magic happens!

Desmodus is our reverb plugin, based on the Desmodus Versio module. If you’re not familiar with the Desmodus already, it’s a synthetic-tail-generator reverb that is designed to be an instrument in itself instead of just another room simulator. Like infinite ‘verb? You’re in luck! The feedback parameter on Desmodus, called Regen, goes well beyond 100% (in fact, 100% feedback is only halfway through the parameter!). The further past 100% you go, the more intense the atmosphere you create. And if you crank Regen all the way up, it ducks based on input sounds, so you can make some awesome automatic sidechain effects.

Desmodus has three reverb algorithms: limit, distort, and shimmer. Limit is a (relatively) clean reverb tail. Distort adds slight saturation to the reverb tank, giving you some grit on your more intense ‘verbs. And shimmer adds a +1 octave shift to the tank, giving you some really beautiful atmospheres. (Well, they’re pretty until you add the LFO… then they get incredibly creepy.)

Those modes aren’t the only way you can shape your tails, though. Enter Tone: it’s a DJ-style lowpass/highpass filter in the reverb tank, and it lets you choose where you want your atmosphere to sit.

And if you want things to get a bit more chaotic, it’s got internal delay-line modulation with the LFO/Index controls: modulating the delay lines can do anything from spice up a clean reverb to bring you into a new, demented world of chaos.

Last but not least, Desmodus is a charity initiative: a portion of the proceeds of all Desmodus licenses sold go to Bat Conservation International. You can read all about why bats are so important and find out what BCI is doing to help them survive and thrive here.

Cursus Vereor is a combo: it’s based on our Cursus Iteritas oscillator, and Ampla Versio dynamics firmware. It’s the most gentle of the bunch (at least, it can be — that Fold slider doesn’t mess around). It’s got the same dynamically generated wavetable engine of the Cursus, paired with an ADSR-controlled VCF/VCA dynamics section.

And that dynamics section is really deep and a bit unusual. It’s got an ADSR envelope with adjustable curve that controls the volume of the synth, as you’d expect, and also controls the cutoff of a filter. The filter can be a lowpass, bandpass, or highpass filter, and you can blend it in with the appropriately named Blend control. The filter is resonant, too, and past 75% the resonance modulates the filter cutoff creating some awesome distorted and squelchy sounds.

While Cursus Vereor only has 6 tone controls, a filter, and a handful of controls for envelope shaping, it’s got a huge sonic palette: every time we open it up we end up creating something we’ve never heard before. Just paired with Desmodus, we’re pretty sure you could write a whole ambient soundtrack.”