Capable of generating complex envelopes, modulation signals and audio, the module allows you to sculpt your sound by producing time-limited signals or “wave packets”.

Each wave packet is determined in four primary dimensions: time, depth, frequency and wave shape. With five distinct unipolar and bipolar outputs, a wide range of shapes and sounds can be produced: an envelope growing from nothing to wild oscillation, a punchy bass drum, a ping-multiplied burst generator, an amplitude-varying LFO or timbre-morphing oscillator. 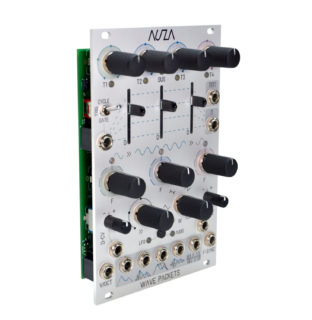 Once animated, the 3 depth sliders sculpt the wave packet’s overall contours, whilst the wave shape, glide and 3 frequency controls determine its oscillations through time.

The five outputs map five distinct interactions between the contour function and oscillations. These can be summarized as: the pure contour, the unipolar wave, the resonating contour, the capsulated oscillator and the pure oscillator.

The module is fully self-patchable, allowing for new wave packet models to be achieved. Examples include patching a unipolar output into wave shape CV for morphing across timbres, or patching a bipolar output into depth CV to achieve audio-rate modulation. By using multiple outputs at the same time, Wave Packets can also act as a hub for orchestrating movement across patches.

Wave Packets is expected to be available in early 2021. Pricing is to be announced.