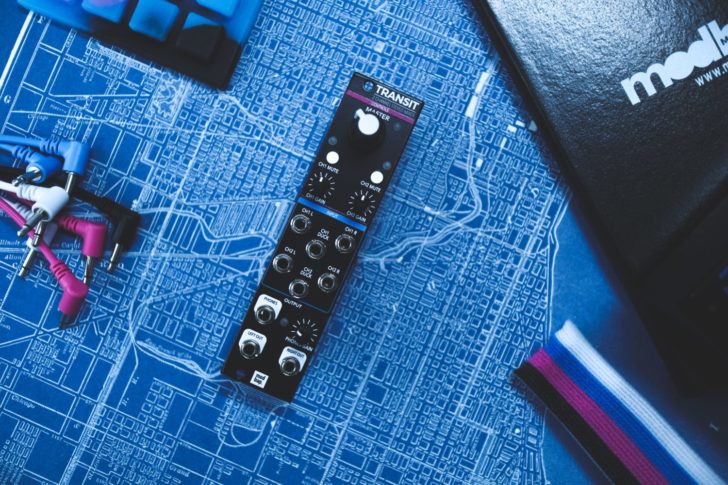 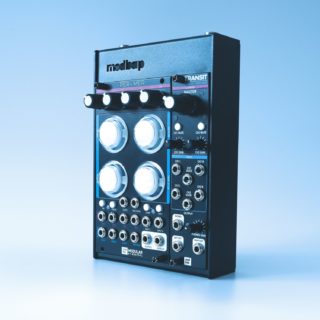 Transit takes two stereo — dual mono — lanes of audio with an all-analog signal path and embellishes each of them with its own input gain control (CH1 GAIN and CH2 GAIN), mute button (CH1 MUTE and CH2 MUTE), and ducking input (CH1 DUCK and CH2 DUCK), the latter operating like traditional side-chaining on a compressor, whereby an input signal, CV (Control Voltage), or trigger input — i.e. LFO (Low-Frequency Oscillator), Clock, Gate — modulates the gain reduction of the audio. Applying this well-known production technique to the ever-widening world of Eurorack should appeal to audio professionals, beat-makers, and musicians to whom it is already familiar from a wide variety of music genres where an effect is activated by an audio track.

Transit also boasts a 3.5mm headphone (PHONES) jack with its own independent volume (PHONES GAIN) control knob, while its all- analog signal path’s final destination is a left and right stereo output (LEFT OUT and RIGHT OUT) with an associated MASTER volume knob.

Says Modbap Modular by BeatPPL designer and founder Corry Banks: “The idea for Transit came about because our Per4mer quad performance FX unit sat perfectly in one of our Modbap20 powered Eurorack pods. … In this configuration, it comfortably resided on the desktop amongst all my tabletop synths, drum machines, and samplers, but I found that I wanted a bit more control over the signal into Per4mer — plus, perhaps, a headphone jack — and I definitely wanted a master volume level control for live sets. So it made perfect sense to subsequently design a module that could fill the empty 6HP next to the Per4mer in the 20HP Modbap20. Together, Transit and Per4mer make for a perfect pairing while complementing the tabletop synth and beat-maker desktop.”

Transit is available to order for $249 US at retailers worldwide and via the ModBap webstore. The module is expected to ship in June 2022.

Regardless of what you play, the biggest thing is keeping the feel going.