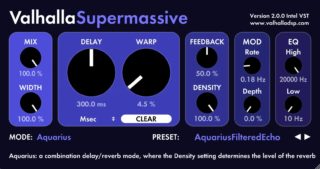 Here’s what he has to say about Supermassive 2.0:

ValhallaSupermassive is 2 years old, and to mark the occasion, we’re releasing the 2.0.0 Supermassive update with two new reverb modes, Aquarius and Pisces.

Aquarius and Pisces are both modified feedback delay networks in a topology I’m calling “EchoVerb.” These algorithms have a strong audible echo, which directly corresponds to the displayed Delay time.

By modifying WARP, FEEDBACK, and DENSITY, Aquarius and Pisces can be used for standard delays, delays with reverb mixed in, reverb with a strong pre-delay, or weird and wild echo sounds.

Here’s an example of Aquarius in action:

Here’s a sound example for Pisces:

Valhalla Supermassive 2.0 is available now as a free download.