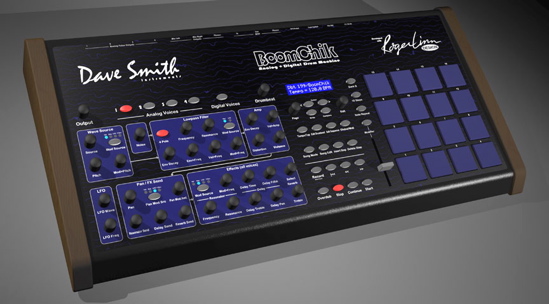 Every year at NAMM, some of the sexiest gear and software that is shown is stuff that isn’t available. Typically, about time for the summer NAMM show, companies announce that they are finally shipping the product.

In addition to the products that actually ship, though, there are items announced that you never hear about again. We’re still drooling over a virtual analog keyboard that Kurzweil announced in 2004, the Kurzweil VA1.

Here’s what Dave Smith has to say about the drum machine concept:

We announced a new gem in the works at the NAMM show last month, a new drum machine tentatively called BoomChik. I am designing this with Roger Linn, the undisputed king of drum machines, who not only invented them back in the late 70s/80s (LM-1, Linndrum, Linn 9000), but also designed the MPCs that just about everyone uses now.

We’re about a year away from production, so it’s currently in the vaporware, uh, I mean, computer simulation stage. The image above is the current vision, though it will likely go through a number of changes over the year. We will update the website every few months with the latest status, so in the meanwhile please don’t ask about features or specifics on the design – it’s all subject to change anyway! As far as price, best guess is $1000 – $1500 range. We’re shooting for the lower, but we all know how that can go.

Basically, it is meant to be a drum machine, not an MPC. It will have both real analog percussion and normal sample playback, plus a bunch of novel processing. The idea is to produce sounds with some real, unique personality, different from everything else out there. Those of you with Evolvers can likely imagine what sounds will be possible, but it should go beyond that also.

It’s vaporware, but it’s damn sexy vaporware. Linn’s background with drum machines & the MPC is unparalleled, and Dave Smith is one of the top living synth designers in the world.

We’re hoping we can check this out at the 2008 NAMM Show!