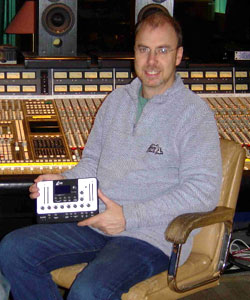 Our contact at Focusrite sends word about a massive project to remaster Genesis’ back catalog for surround sound. Nick Davis, right, spent nearly three years remastering the entire Genesis back catalogue in 5.1.

Davis started his career as a tape op back in 1983, recording early demos with Tears For Fears for Polygram. He moved to Air Studios and then Westside where he became chief engineer. After going freelance he engineered Mike And The Mechanics’ The Living Years LP, which was the start of a long relationship with Genesis.

“I’ve just kind of stayed within the family,” he says. “Once they find people they like to work with they stick with them. I’ve done some of their live albums and produced a couple of their later albums. They decided to remix the catalogue in 5.1 and it’s been a fantastic project, albeit one that’s been almost three years in the making!”

“Various members have been more or less involved,” Davis continues. “Tony Banks very much so. He’s come in and heard every mix and helped me finish them off. Mike [Rutherford] has heard about 20-30%. Steve Hackett has been very good on the stuff he’s on and Peter Gabriel has been very good too. Phil Collins has probably been the least involved and has just let us get on with it. He trusts us not to f*ck it up!”

Nick’s idea was to keep the new processing in keeping with the original recordings so he didn’t bring in too much digital processing, choosing instead a host of analog gear including a Focusrite ISA215 EQ.

Towards the end of the mix process, Nick took delivery of a Liquid Mix which helped in some of the more unusual areas of the project.

“I used the Liquid Mix for some rarity stuff and bootleg material that came in from various sources around the world. One of them was this interview Genesis did for an American chat show in the 70’s and the sound on it was terrible, so I used the Liquid Mix to EQ and compress that for the DVD. I do like having so many compressors and EQs on hand to switch between, and I love the fact that the processing is on board. It is a big selling point that the box doesn’t drain your computer processing power.”

So how does Nick feel about the project as he listens back to the masters?

“It is fantastic,” he says. “I know I would say that as I’m working on it, but I’ve just been listening back to And Then There Were Three. It’s not my favourite album but it does sound fantastic. Some of the big moments are very exciting.”

And what does he have planned for the future?

“Who knows, nothing’s released yet so no one knows what I’ve done! I’ve always been into Genesis and Pink Floyd as I grew up with them. If someone asked me to do Floyd’s Wish You Were Here I think I might take them up on it!”

“A lot of it is finding the tapes, preparing and copying them. It’s not just about the mixing. And now we’re into the mastering stages it’s listening to the masters and checking that there are no errors on them. Once you take all of that into consideration it’s probably two to three months work per album.”

“I try and avoid doing anything gimmicky. It’s great with Genesis because they have these big moments and you can just get a load of stuff out of all the speakers but I generally don’t like stuff flying around too much. For example I would usually have the drums at the front or half way but never all the way behind you. The other thing with 5.1 is if you spread it too much you actually lose the power. It’s a bit like people saying mono sounds more powerful than stereo because with mono it’s concentrated in one area. So if you start spreading it too much in 5.1 you sometimes lose the power because it’s the way that it sticks together that makes it sound as powerful.”