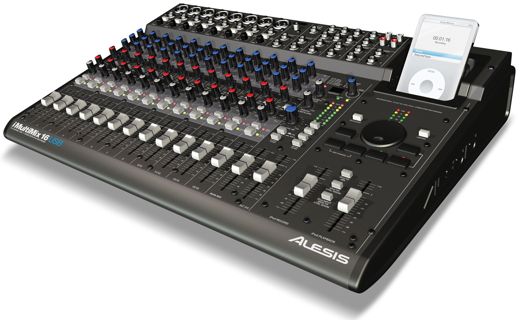 The iMultiMix 16 USB is a mobile recording mixer with iPod transport controls and a control wheel built right into the surface for complete control of the iPod while it is being docked in the mixer. The mixer features a universal dock for iPod that lets you record directly to any iPod Classic, 5th generation (video) and 2nd or 3rd generation iPod nano.

The USB connection transfers tracks into iTunes upon connection to a computer. Files recorded into the iPod are CD quality, 16-Bit, 44.1 kHz .wav files.

The iMultiMix 16 USB also features built-in audio effects. Vocalists can add professional quality reverb and guitar players can create flange effects, all of which are mixed and recorded to the iPod with ease. iPod owners will find this mixer the perfect compliment for a wide variety of recording needs thanks to its natural merging of the control wheel and traditional mixer knobs.