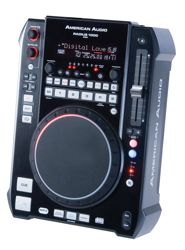 The Radius 1000 lets you play digital tracks directly from your computer without using a mouse, giving you a real hardware feel.

In addition to functioning as an 8-channel MIDI controller for music playback software, the Radius 1000 also plays CD, CD-R and MP3 discs. There’s also a Dual Mode that allows you to play a CD or MP3 disc and control your computer software at the same time.

There’s a nice side benefit of this: In the event of a computer crash during a gig, you can switch over to playing discs on the Radius 1000.

The Radius 1000 is compatible with popular DJ software programs, including Tracktor and Serato (software not included with unit). When in the MIDI mode an external soundcard is required (not included).

The deck comes with 9 onboard digital effects: Scratch (Digital Scratch and Beat Juggle modes), Filter, Echo, Trans, Skid, Phase, Flanger, Pan and Bop. Time & Ratio Adjustment is available for all effects, and a Digital BPM Counter keeps them locked in sync with the beat of the music. The Radius 1000’s big 6-inch jog wheel operates in 3 modes — Normal, Scratch and Auto Cue Scratch, which is ideal for Beat Juggling.

The Radius 1000 features a super-cool design that not only boosts functionality but also looks great in the DJs booth. A bright display shows track and artist ID tags for quick reference, and a red LED visual marker rotates around the jog wheel to show you what point within the track the CD or MP3 is currently playing.