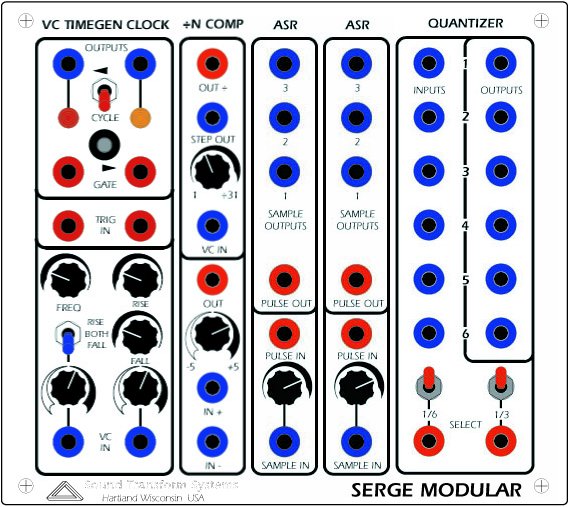 If you’ve used the Serge ASR Quantizer, leave a comment with your thoughts!

this is a great module for sequencing aplications, and not only:

it can generate arabesque melodies with its two ASR’s that can be chained to form a single 6 channel ASR), using 3 VCO’s. or you could use the ASR’s, clocked at audio rate, as a weird wave processor….

you can further quantize various sequencer channels with the Quantizer, or quantize the outputs of the ASR’s…

with the ‘Divide by N Comp’ you get a comparator, a clock divider up to /31 (with odd and even clock divisions), an audio wave divider to create subharmonics, a staircase wave generator with N steps, (all these with the N defined manually or via VC) a tool to create sharp clocking pulses, etc…

the Quantizer features six channels of quantizing plus two toggle switches, in addition to its gate input jacks, for selection of intervallic step variants (manualy or via VC).

put all these together for countless more applications….