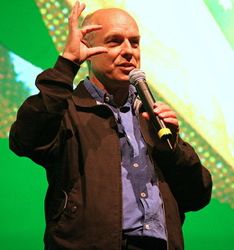 Brian Eno has some interesting ideas on the future of music in his latest essay for Prospect magazine:

The duplicability of recordings has had an unexpected effect.

The pressure is on to develop content that isn’t easily copyable—so now everything other than the recorded music is becoming the valuable part of what artists sell.

Of course, they’ll still want to sell their music, but now they’ll embed that relatively valueless product within a matrix of hard-to-copy (and therefore valuable) artwork.

People who won’t pay £15 for a CD will pay £150 for the limited edition version with additional artwork, photos, booklet and DVDs. They often already own the music, downloaded—but now they want the art. They’re buying art, and they’re buying it in a new way.

That suggests to me the possibility of a refreshingly democratic art market: a new way for visual artists, designers, animators and film-makers to make a living.

So, as one business folds, several others open up.

As always with Eno – the entire piece is interesting.

5 thoughts on “Brian Eno On The Future Of Music”