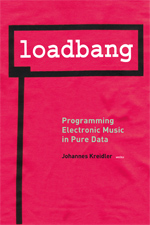 Pd was initiated by American software engineer Miller Puckette, who previous co-developed the well known and similarly structured software Max/Msp. Pd is not commercial software; i.e., it was not developed by a corporation and is not for sale. Instead, it is “open source”: its source code is not the (patented) property of a corporation, but is rather freely available to all. One drawback to this is that a detailed operating manual for users who lack programming experience has not existed until now. In contrast to a corporation— which has a monetary interest in ensuring that first-time users can easily operate new software—the open source movement lacks such a driving force to make itself accessible. This book is an attempt to fill that gap.

This tutorial is designed for self-study, principally for composers. It begins with explanations of basic programming and acoustic principles then gradually builds up to the most advanced electronic music processing techniques. The book’s teaching approach is focused primarily on hearing, which we consider a faster and more enjoyable way to absorb new concepts than through abstract formulas.

The book can also be purchased as a paperback. Details at the Pd Tutorial site.