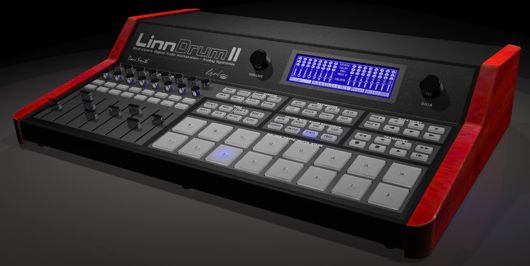 The Roger Linn & Dave Smith LinnDrum II, formerly the BoomChick, appears to be officially on hold.

We’re still hard at work but regrettably won’t be able to meet our earlier estimate of a 3rd-quarter 2009 ship date. The recent changes in the economy have caused us to rethink our design, which had become too expensive. One problem is that Dave’s customers and my customers had different views of what the product should be, so we had been working on a more elaborate design that we thought would please them both. Then the economy tanked. Oops. The other issue is that Dave and his team have been having such success with their analog synths that they’ve been spreading themselves pretty thin trying to work on both projects.

So given these circumstances, we’d prefer not to state another release date estimate at this time, but when we do we promise to post it here along with any other information we’re able to release. Also, given that Dave and his team have their hands pretty full and that a beat-oriented product is more of a Roger product anyway, we’ll probably be selling it through Roger Linn Design instead of from both companies as we had previously considered.

I’d personally love to tell everybody all the details of the product design, features and price as we did with our initial designs of the product, but there’s that pesky problem of keeping the information from our competitors. So we need to keep tight-lipped for now and regrettably can’t answer any questions. Thanks also to those who have kindly asked to place advance orders. However, we don’t feel it’s right to accept orders until we are able to release the price or more information about the product.

And now I must get back to work. 🙂

This is sad to see.

The LinnDrum, especially in its early BoomChick incarnation, which we called the 2007 NAMM Show‘s sexiest vaporware, looked like it was going to follow the example of Dave Smith’s current gear, combining the best of vintage instruments with modern technology.